Home Our History
Learn More about

Satisfying the public’s hunger for sumptuous Italian food has been a part of Rosa Colandrea’s life for nearly 40 years. It is literally a family tradition involving not only Rosa but her sister, brothers, children, and husband. It all began almost at birth with Rosa and her family coming to the United States from Naples, Italy.

“Nobody leaves here hungry. That is what comes from being from Naples,” Rosa says, smiling.

Rosa is the owner of Kings New York pizza located at 313 Rockcliff Drive in Martinsburg, West Virginia. Rosa, her husband Salvatore, and daughters Tanya and Lexia are all part of the business.

“I worked in my father’s restaurant. I neve wanted to do anything else. I enjoy what I do,” Rosa Says.

Along with Rosa, her three brothers Dominic, Pasquale and Andrea all had the desire to start their own restaurants. When Vincenzo decided to retire in 1995, he had a friend who ran King’s Pizza in Kearneysville, West Virginia, who also wanted to retire. The three brothers eventually all settled in the Eastern Panhandle with restaurants in Kearneysville, falling waters, Hedgesville, and Inwood.

Rosa and her family opened the Martinsburg location in 2000.

“We kept New York in the name because we serve NJM style pizzas with the thin crust,” Rosa says.

Kings seats 70 people with outside tables available and has 18 employees. Catering and delivery are also available. Rosa says she has plans to expand the business, but in 2019 things changed.

“She was diagnosed with breast cancer,” her sister Tina says. “She came back to work a day after her operation. She faced cancer on her own and never placed a burden on the family, but she always had our support. Mary grace Cole, a dear friend and customer, also stood by her all the way and helped her when she needed it. Still, Rosa has tremendous strength and is strong minded.”

“Working was what I most needed to do. I was happy at work period I wanted my customers to be happy here. Feel at home. I wanted this to be their second home,” says Rosa.

Rose as customers responded to not only delicious offerings on the menu but the restaurants atmosphere as well.

“I talk to my customers. We laugh. I tell them, “come. Sit for a while and have cannoli.” There is always something going on here. I even have customers who bring in vegetables for me. We have a great customer support,” Rosa says.

In that support continued yet another tragic event hit the restaurant: the COVID-19 pandemic.

“When we had to temporarily close, we had people telling us on Facebook that they would come to us anyway. ‘Open tonight. Will be there,’ people said. We opened gradually. People can now eat in the restaurant or outside or have curbside delivery. It’s up to them,” Rosa says.

Dedication to giving customers a wide variety of different Italian dishes plus making the experience an unforgettable one is all part of Rosa’s goal one she includes right on the menu, along with a tribute to her family.

“The journey began in 1978. In Italy, each meal is a celebration of life, a special time to share and enjoy good food and wine with family and friends. In memory of our ancestors’ journey and as a tribute to our parents, we would like to show our appreciation by continuing this warm tradition of ‘Italian hospitality’ to you, our newfound family, and friends. Salute!”

And this ‘Italian hospitality’ not only includes an extremely friendly atmosphere but also portions that can only be described as huge. For example, the lunch special features a drink in a slice of pizza. That pizza slice barely fits on the paper plate it rests on. The slice of the simple cheese coated pizza sampled was delicious and easily rivaled those found up North.

A reviewer who visited the establishment refer to one of the menu items as “a monstrously thick club sandwich that looks like it took a pound of lunchmeat to create an Golden battered onion rings that taste like they came from Atlantic City, New Jersey.”

The Colandrea’s make their own pizza and spaghetti sauce, Alfredo sauce, marinara sauce, and pizza dough.

Homemade lasagna is an extremely popular dish at Kings, consisting of layering of pasta with meat sauce. Ricotta cheese and mozzarella cheese melted on top. Spaghetti with meat sauce is another favorite served with a traditional Italian meat sauce seasoned with onions and herbs over the spaghetti. Pepperoni pizza tends to be a favorite for pizza lovers the steak and cheese hoagie is a big request.

Tina says the restaurant also offers good seafood platters. One on the menu is called seafood lover with shrimp, clams, scallops, calamari, and lobster over linguine with marinara sauce.

Youngsters can enjoy a wide assortment of dishes on the IL menu ISI Bambino or the children’s menu that includes stuffed shells; pasta with meat sauce or tomato sauce, or with meatballs or sausage; cheese or meat ravioli; lasagna; and even chicken tenders with French fries.

There’s a wide assortment of soups and salads, including Minestrone soup of fresh vegetables , beans and pasta in a light tomato broth; Pasta Fagioli, white beans, tomatoes and pasta with basil in a savory broth; the chef’s salad topped with chopped ham, Turkey and provolone cheese; in grilled chicken salad.

Plenty of antipasti or appetizers are available from breaded mushrooms and zucchini to garlic bread.

And, of course, the dessert menu has plenty of delights like cheesecake; Cannoli, a crisp and flaky crust enclosing a creamy sweet ricotta filling; Homemade tiramisu , from the Italian language meaning “pick me up or cheer me up,” a coffee flavored treat; Cheesecake and red velvet cupcake.

No matter what you order, Rosa says it is all made with love.

“Loving what you do, the product has to come out right. We also are proud of the high quality of our food,” she says. 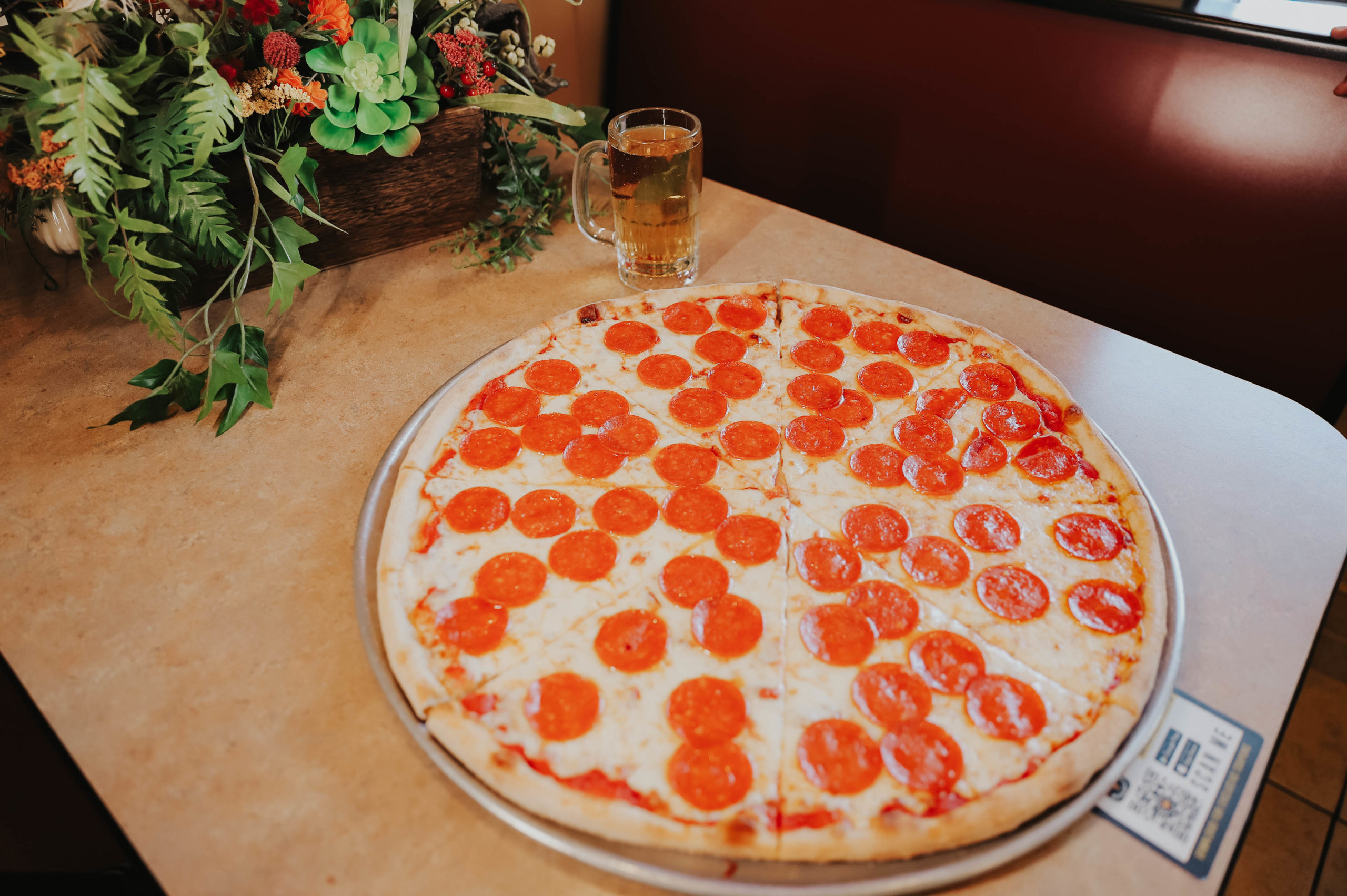